03/11/19
Salle de la Fete, Arlanc, France & L'Octopus, Cunlhat
Day 10. Was a bit of a rough one to get up in time to catch the 7.12 train in Dijon. My first coffee in Nevers where I had to change trains. I've been to Ambert last year when touring in France. An evening and concert you don't get to experience very often. Maybe only once in a lifetime. The person who booked me and has been sort of central character of a lot of cultural /activities and regional networking, died in a car crash a few days prior to my arrival and concert. I found out by receiving an email from his account signed by a different person. The L'Elegante, everyone attending the evening, the whole atmosphere was eerie. I recall it being a difficult one to perform or even start the concert. How to find the right songs and words for a crowd of people having just lost both a very good friend and one of the key figures of local/regional social and cultural activities? Most of them about to leave for the funeral in Nice, five o'clock in the morning. I recall me having difficulties to hold back the tears during the set as some words made a new, different sense to me while singing in this setting and situation. It feels inappropriate to call such a performance one of my best shows ever but in fact it must have been. It was one with an extraordinarily unifying power though. In the end of the evening it felt like all of us in the small café were in just the right place at the right time, feeling comforted by the healing power of songs and music. Might sound quirky saying this but such was the mood that evening back in November 2018.

You might figure I've been looking forward to coming back. How did things change in the past 12 months? Did the hard time they had brought things to a halt? It's a bit of an effort to get to that part of France by means of public transport to say the least. This part of the Auvergne situated between Clermont-Ferrand and Saint Étienne is blessed with a both beautiful and wild landscape. Like in so many other places in rural Europe, industry has moved away or gone down due to globalized trade and markets, thus leaving a vast area literally empty. No employment here and the farmers still here are struggling with national and European regulations and tax policies of all kinds. In a way a doomed part of the country.
The other side of the medal is: dropping rates on rent, real estate and property opens up space for alternative concepts for living. Also, as in this rural vicinity villages being scattered across a wide area without a public transport infrastructure existing, you don't really have a choice but to network and get things sorted yourself.
For instance the place I stayed at in Cunlhat is the former branch of Credit L'Eparge, built in 1935. In the process of downsizing and digitalization I assume, the bank sold a lot of their buildings in the countryside for actually next to nothing. A group of about 15 people bought it and converted it to their home and workspace. The latter including farming, milling, baking, organizing cultural events and god knows what else. Even though, this is something I probably couldn't do myself I'm deeply impressed by it. You need some guts to move out here and start to live your own utopian dream.

This time they asked me if I'd be up for playing two shows. A first one in Arlanc, a twenty minutes drive down the Dore river valley on their annual fund-raiser festival for refugees, the second one at L'Octopus in Cunhlat, the local community's café culturally. We'll see what this will be like tonight, the one yesterday at the "Salle de la Fete" in Arlanc was a very special, wonderful thing to do.

Everyone involved, people from all the nearer villages around, were cooking, baking, setting up things, making it the event of the year. Apart from the beer everything on offer was given to the guests for voluntary donations, all going into the pot that would help refugees in trouble to survive out here. Oh, of course the food was terrific. We>'re in France, eh? Haven't seen a soup kettle of this size before, took three of them to lift it to the table. Home-made garlic bread, salads and a dream of an apple tarte with caramel sauce and ice cream as a dessert. DIY spirit at its best. Funds raised for the poorest of the poor by people who mostly just get along themselves. A different level of pleasure and enjoyment to perform in this place, for these people, for this cause.

The following day I'm booked for L'Octopus. That's the café culturelle or bar concert of Cunlhat. It's a beautiful, cosy place. Even more so as it's getting freezing cold up here. As for travelling this is probably the most pleasant one on this tour. I can walk with my gear from where I'm staying to wards the medieval church. A three-minute walk. Hip and all the other guys who were so busy setting up the stage and pa for yesterday's event are back in business, everything is prepared when I arrive around 5 pm. All a bit concerned if there'll be an audience as the party yesterday lasted into the early morning hours. There's mulled wine, there is tea & coffee, again there is food for everyone - prix libre. It's wonderful. Stage covered with carpets. Nice little pa, good sound, very attentive audience, among them some familiar faces from last year. And yesterday. One of the reasons is over the past five years, after they started with buying the bank building a lot of young people, friends, people who heard about it started to move here. Bought cheap houses. Started a life here in the middle of nowhere. It's an amazing place. It's one of a number of Utopias I've come across touring this year. It's a good thing to know there is more of them all over Europe and I do hope there'll be a lot more coming. 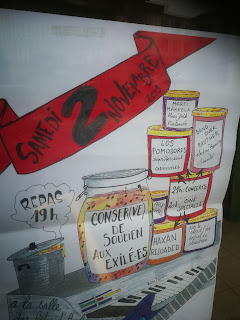 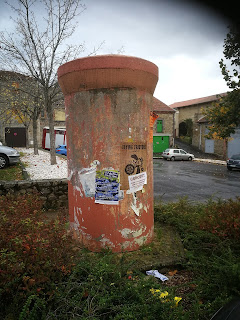 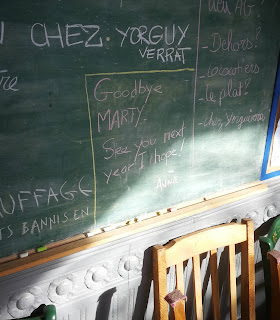